This is Cito, a Thames Waterman Cutter. A solid 300kgs of GRP, ten metres long; she has six oars in line; six rowers sit on fixed seats, there is a cox in the stern to navigate and steer and room for one passenger. I was invited to join the crew to row from Greenwich Yacht Club across the Thames to Bow Creek and Bow Lock and then down along the Limehouse Cut to Limehouse Basin and back out onto the Thames returning on the long loop of the river to Greenwich.
I found it easier to pull in time when I could hear the oars dipping and the regular rhythm of the oars in the rowlocks. It was extremely satisfying when the six of us became a single unit working in unison. It was much more difficult with the noise of the river and wind and the choppy water of the Thames to keep in time.
Rowing, they say exercises 85% of the bodies muscles. I asked Peter Waugh the cox which were the muscles that weren't involved and he indicated the ones between the ears! 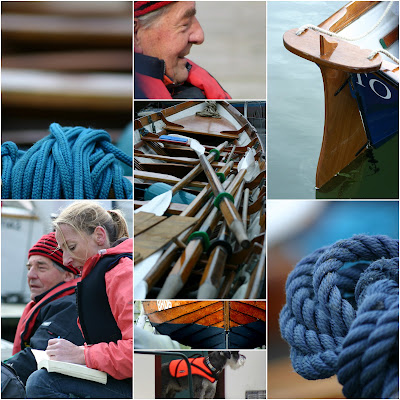 View Larger Map
Posted by Jeff Soan at 21:49 No comments: