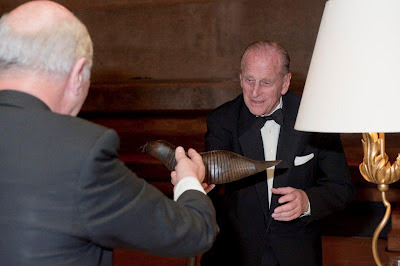 A Craftsman at the top of his game

HRH The Duke of Edinburgh was presented with a seal made from Cutty Sark teak at a dinner to celebrate the many years of his association with the clipper.
I have had this note from the offices of Lord Sterling

..... the seal was very well received by His Royal Highness. He was clearly delighted with it and insisted on carrying it personally from the table to his waiting car at the end of the meal and was playfully shaking the seal by its head to watch the movement of the body.

Subsequently we have had a note from his Equerry in which he describes the Duke of Edinburgh’s thanks for “the wonderful seal” presented to him. He goes on to say “it was very skilfully made, clearly by a craftsman at the top of his game”.